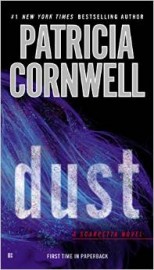 A body, oddly draped in an unusual cloth, has just been discovered inside the sheltered gates of MIT, and it’s suspected the identity is that of missing computer engineering grad student Gail Shipton, last seen the night before at a trendy Cambridge bar. It appears she’s been murdered, mere weeks before the trial in her $100 million lawsuit against her former financial manager, and Massachusetts Chief Medical Examiner Kay Scarpetta doubts it’s a coincidence. She also fears the case may have a connection with her computer genius niece, Lucy. In Dust, Scarpetta and her colleagues are up against a force far more sinister than a sexual predator who fits the criminal classification of a “spectacle killer.” The murder of Gail Shipton soon leads deep into the dark world of designer drugs, drone technology, organized crime, and shocking corruption at the highest levels.