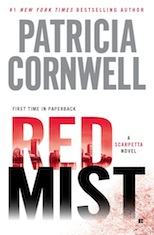 On her quest to find out exactly what happened to her former deputy chief, Jack Fielding, murdered six months before, Scarpetta drives to the Georgia Prison for Women to meet a convicted sex offender and the mother of a vicious and diabolically brilliant killer. Against the advice of her FBI criminal intelligence agent husband, Benton Wesley, Scarpetta is determined to hear this woman out.

Scarpetta has both personal and professional reasons to learn more about a string of grisly killings: the murder of a Savannah family years earlier, a young woman on death row, and then other inexplicable deaths that begin to occur at a breathtaking pace. Driven by inner forces, Scarpetta discovers connections that compel her to conclude that what she thought ended with Fielding’s death and an attempt on her own life is only the beginning of something far more destructive: a terrifying terrain of conspiracy and potential terrorism on an international scale.

And she is the only one who can stop it.